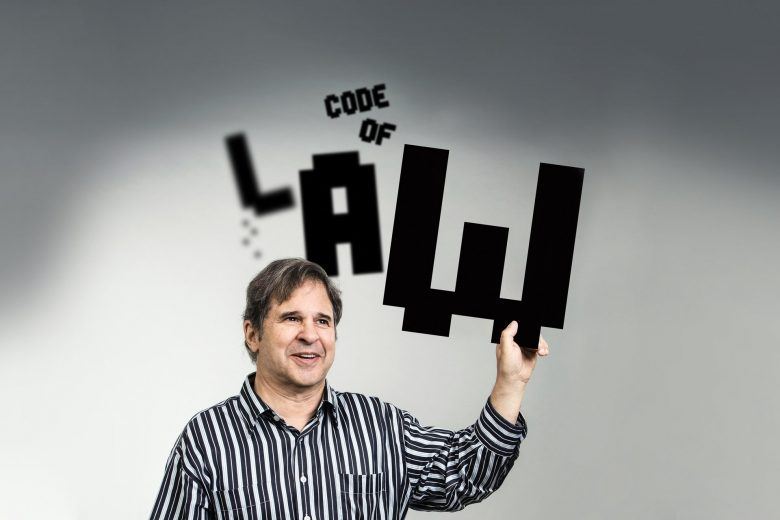 Ashley Lipson was in court to argue some parking citations when presiding judge Anita Stuppler recognized his name. She asked if he was the person responsible for creating Objection!, a computer game used by schools, government agencies, and judges around the world to brush up on the law. When he answered in the affirmative, the two proceeded to have a lively sidebar discussion about the software and its role in continuing legal education.

It still didn’t help his case (he lost). But a few months after Lipson paid his fine, Stuppler got in touch and asked him for a favor. Lipson agreed, and the two struck up a friendship as a result. She asked if he’d be interested in teaching alongside her at the University of La Verne’s College of Law. An appeal had been made; his talents were needed.

That was 1998. More than 20 years have since passed, and Lipson continues to challenge generations of lawyers by teaching a record number of standard and bar-tested law courses for the university. He doesn’t see that changing anytime soon.

However, Lipson’s primary focus is teaching law students the fundamentals. No, not tort reform – the real fundamentals: physics, accounting, and more. He’s concerned the LSAT and current law school curriculum ignore basic science, technology, engineering, and mathematics (STEM) education despite their unmistakable value for practitioners. The result is a generation of lawyers who fail to understand statistics or balance sheets, Lipson said. When it comes time to negotiate settlements, this knowledge deficit can lead to real losses for clients.

Enter Math, Physics, and Finance for Lawyers. This one-of-a-kind course, taught by Lipson through the College of Law, (re)introduces common sense mathematics and science to students and helps them navigate numbers in a legal setting. While he teaches a variety of traditional subjects as well, connecting future lawyers with Newtonian physics, Einstein, and thermodynamics brings Lipson a special kind of joy.

“Teaching the material is unique and challenging,” he said.

“Everything you tell them is new, important for real-life practice, and often exciting. Moreover, students correctly feel as if they’re getting an advantage over other practitioners who, most likely, have no such training and are under the severe misconception practicing law does not involve numbers, statistics, and math.”

This isn’t the only unique class Lipson built for the College of Law; he also founded Videogame Law in 2002, when online multiplayer gaming was in its infancy. Given the widespread adoption of gaming since then, the coursework provides specialized skills University of La Verne law students can use to differentiate themselves.

“Our students tend to be serious workers from working families,” he said. “Experience as a legal practitioner has taught me that University of La Verne grads are tougher, more formidable opponents in the courtroom.”

If Lipson had his way, courses like Videogame Law and Math, Physics, and Finance for Lawyers would be standard electives across the country – “its spread to other schools is long overdue.” Until there are more hurdle-removing innovators, he refines and updates Objection! as he prepares a new game designed to teach law students basic and advanced legal terminology for release. What began as a passion project on an Atari 400 in the late 1970s has transformed over the years into one of the legal world’s preeminent teaching tools. Through multiple-choice “interrogations,” the current standard edition has more than 32 million variations of play to keep courtroom skills sharp.

“There’s usually less than one second between the end of an opposing lawyer’s question and the witness’ answer,” Lipson said. “Within that split second, a lawyer has to recognize a bad question, decide if it’s going to hurt the client, object, and then articulate a valid basis for it. Objecting is a skill requiring quick reflexes and practice. What better way to teach skill and speed than with a video game?”