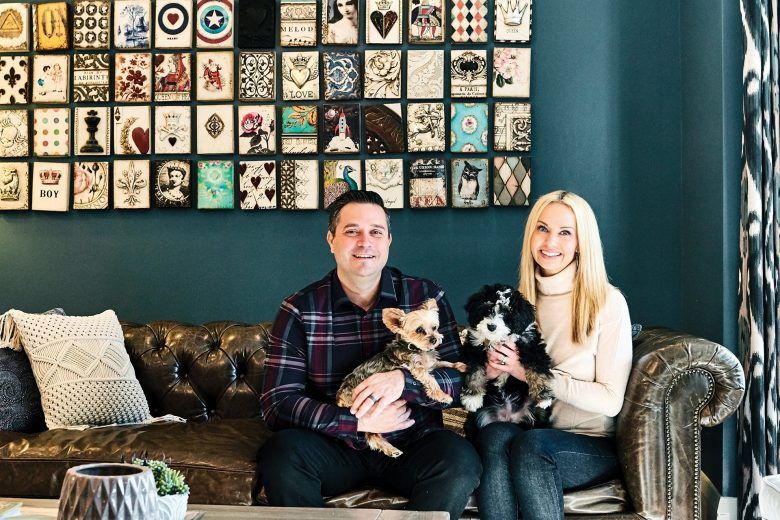 Jessie and Tina Rodriguez were looking for a place to live when a friend offered to rent his family home to them for a short time. They agreed, and soon found themselves in love with the place. Built in 1906, the five-bedroom, two-story Arts and Crafts-style home had a front porch framed with river rock, ample space for their young sons, and solid bones.

They saw potential – not surprising, considering they currently co-host the HGTV home renovation series Vintage Flip. But their interest went way beyond the transactional. Walking the property, they knew the house could potentially be their last – their “forever” home.

So Jessie and Tina made an offer that couldn’t be refused. Now, when he’s not running a successful real estate business, standing in front of the camera, or speaking to audiences across the country, the family works to transform the house in its image. It’s part of the pattern of teardown and reconstruction that’s followed them throughout their lives, including Jessie’s time at the University of La Verne.

Originally from Fontana, Jessie met Tina while studying architecture at Cal Poly Pomona. Even as their romance blossomed, he changed majors and transferred into La Verne’s computer science program in 2001.

“I wanted a smaller campus environment,” he said. “At La Verne, I knew I could get the attention I would need to succeed.”

Jessie enjoyed campus life. He served as a senator in the university’s student government. At the same time, he began a small mortgage company that quickly took off. Soon, he was struggling with the competing demands of a growing business and a full-time student schedule. So he switched to a part-time business track through the university’s Campus Accelerated Program for Adults.

Jessie and Tina married in May 2007, bought a home in Claremont, California, and settled into a comfortable and successful Southern California lifestyle. Mortgages were a hot commodity and Jessie was adept at packaging them.

Then the financial crisis hit.

“By the fall of 2007, the market dropped so fast I couldn’t recover,” he recalled. “I had to close down my company. Got behind on payments. My car was repossessed, my home foreclosed on. We had to move in with Tina’s parents.”

While Jessie regrouped, Tina suggested he finish his bachelor’s degree at La Verne. He was only a few courses shy of completion. So Jessie threw himself into school and earned his bachelor’s in public administration in 2008.

“I realized how important the degree was,” he said. “Even though I’d had a successful business before the crash, no one saw my business as real experience. I had to reinvent myself.”

It was just the first step in a personal renovation. In a return to real estate, Jessie started Cal American Homes, but instead of financing and processing the dreams of others, this new company purchased, rehabbed, and sold homes throughout the region. It was the perfect fusion of Jessie’s business acumen and love of architecture.

Television was an unplanned phase of the project. After a guest appearance on HGTV’s Flip or Flop, the network reached out and offered Jessie and Tina their own show. Since 2016, the couple has breathed life into dozens of classic Craftsman, Victorian, and Mediterranean homes for the camera, with Tina serving as lead designer and Jessie overseeing construction.

Jessie continues his professional metamorphosis. Cal American is a well-oiled machine, so Jessie could afford to spend the past year traveling the country and talking to others interested in real estate. He’s always on the hunt for another business opportunity—as long as it leaves time for his wife, three sons, and a home that’s under continuous renovation.“Tina and I never had visions of being on TV, but when the opportunity arose we knew it could be good for our business,” Jessie said. “Being able to share our passion for historic homes and being able to transform them has been the best part.”

“I will never slow down,” Jessie said, reflecting on his busy life. “After losing everything once and knowing the pain of that, I will never take my foot off the gas.”