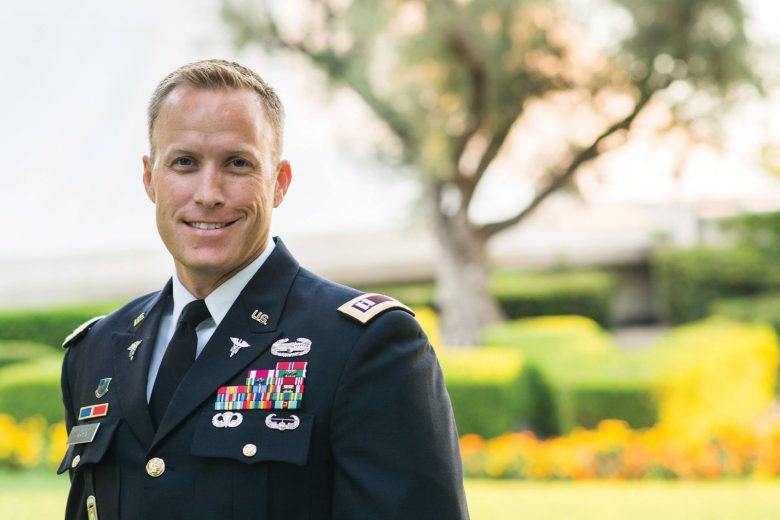 Mannerisms and accents vary among the people Christopher Kahn ’16 encounters in his travels around the world as a captain in the U.S. Army.

But something remains the same everywhere.

“There’s one universal quality we share: laughter,” Kahn says. “It doesn’t have an accent. It doesn’t know diversity. Everybody laughs the same.”

Kahn has been posted around the U.S., as well as Korea, Kuwait, and Iraq. But his latest assignment – a Master of Science in Leadership and Management at the University of La Verne – is more than just a chance to further Kahn’s education.

It is a chance to come home.

Kahn was born at March Air Force Base in Riverside, spending much of his childhood a few blocks north of Old Town La Verne.

His grandmother and great-grandmother came to the city in the 1950s and built a home overlooking San Dimas Canyon.

“When I played football at Bonita High School, my friend and I would bring all of our stuff and just walk on the field (at the University of La Verne) and practice. I really learned how to tackle there!”

After graduation, Kahn enlisted in the military and served four years. One of his leaders suggested he was officer material.

“But the thing about being an officer in the military is you need to have an undergraduate degree,” he says.

Then married with two young children, Kahn completed Fresno State’s kinesiology program in 2007. During an assignment in South Korea five years later, he received another great opportunity from the Army: a chance to earn a graduate degree.

The Army’s Career Satisfaction Program is intensely competitive . Roughly 300 officers in the entire branch are accepted each year.

Once Kahn joined the program, he and his family moved from South Korea to Southern California. The opportunity gave his family a chance to enjoy a better life, and let him pursue a world-class education at the University of La Verne.

Apprehensions about going back to school faded when he walked into the Management 500 class taught by Professor of Management and Leadership Deborah Olson.

“The leadership and management style fits how I think and what I do as a commander and officer. After that class, I knew I was supposed to be in this program.”

“Chris is an amazing person,” she says. “With his background and experience in a wide range of leadership roles, he consistently created connections between concepts covered in class and their real-world applications. He was willing to learn, stretch himself, and approach situations in new and exciting ways.”

Kahn expects to graduate in May. After commencement, his family plans to move to Kentucky.

He is using his time at the University to reconnect with the region and plan for a future in Southern California upon retirement from the military.

“I’d like to work in business,” he says. “Use my 20-plus years in the Army to motivate and develop great leaders. Help organizations I believe in become great.”

He is also considering teaching business leadership at the University. For now, he is content to take his children to school, attend class twice a week, and occasionally lace up for a run around the track.

“This is what I call home,” he says with a universal laugh. “I’m proud of going back to school and doing it my way.”

This article originally appeared in the Spring 2016 issue of Voice Magazine.