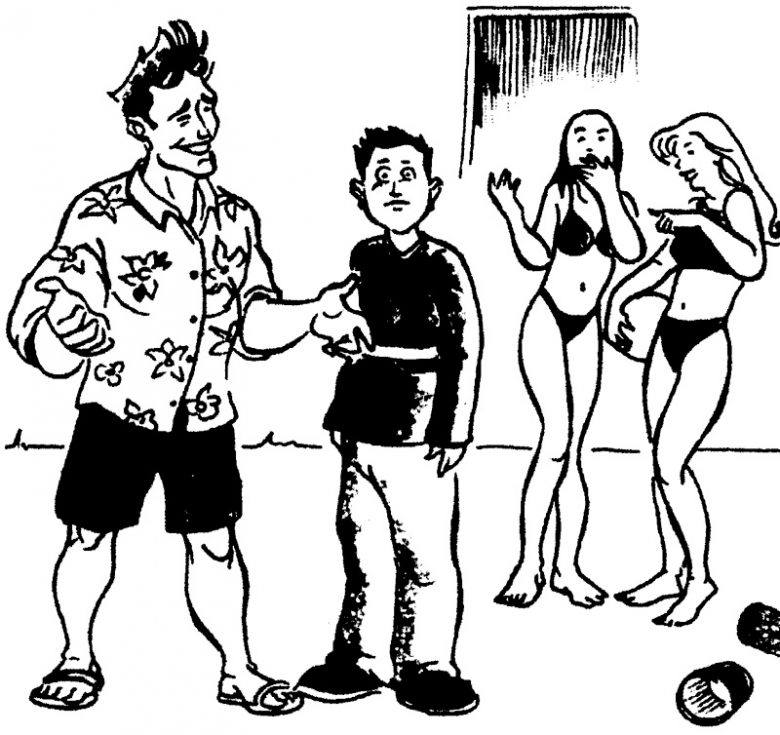 28th Street is a place of dreams. The women are all ridiculously tan, walking into their houses with little else on but their three-inch heels, tiny backpacks, sunglasses, black dresses and bitchy attitudes. Guys run among the old foreign embassies throwing footballs and freshmen at one another.The trees and Victorian architecture betray the evil that churns behind the composites and paddles on the walls of each house. What comes of that evil, no one knows. Least of all the Greeks.

Contrary to the belief that campus organizations conduct business within the confines of USC, the Interfraternity Council holds its meetings on the top of Sigma Nu’s roof. The sun up there is great for tanning. Down below, a volleyball match starts. IFC President Ross Necessary slaps his hand on his longboard. Suddenly, silence falls over his friends as the meeting starts.

“Damn it, we’re not being vacuous enough,” he says.

A confused sorority girl raises her hand. “Um, what does ‘vacuous’ mean?”

“That’s what I like to hear!” Necessary grins. “Fraternity life is never about academics or pursuing education. It’s about keggers, partying, connections and being completely self-absorbed!” A quick pause. “Do you guys think I should grow a goatee?”

“Only if you grow out your sideburns and get some wraparound shades,” replied Student Senate President Tyler Kelley.

“Gotcha.” Necessary stands and rubs cocoa butter on his arms. “Now, to the matter at hand.”

Necessary walks to a chalkboard and points at a variety of statistics that had been prepared for the meeting. “The image of the Greek system has been sliding ever since Animal House, and that’s fine,” Necessary says. “I’ve always been of the impression the less the non-Greek students think of us, the better. But we’ve got a problem. People are starting to think there’s a tangible benefit to letters.”

Ross continues. “As IFC president, I have to answer to these charges. The previous president told me these rumors were unfounded and that popular opinion of our society was lower than ever. I am dismayed. I can’t tell you how much. It makes me want to stop wearing board shorts.

“Our programs to promote ourselves within our system are working nicely. Ironman, which I don’t even care about, seems to be provoking some genuine competition, and the caste system SAE and Phi Delt have been advocating for years is finally being implemented. There’s never been a point when we’ve been more judgmental of each other, and that’s fantastic.”

Necessary deftly pulls a Daily Trojan from his back pocket. “What’s wrong with this picture?” he asks.

“Someone’s actually letting themselves be seen holding a copy of the school newspaper?” asked a Gamma Phi Beta.

“Wrong!” Necessary bellows. “There isn’t an article badmouthing us in this issue! This must change. I’ve leaked a rumor that Kappa Sigma regularly picks a pledge at random to be decapitated, and floated some bogus, poorly photocopied hazing rituals into the hands of the editor. If it worked for the Trojan Knights a few years back, it can work for us.

“We’ve also talked to several sororities and one of them has agreed to have a member appear in Penthouse. Remember when that Tri Delt did it? Man, you can’t buy bad press like that!”

The Council passes out a series of referendums and ideas which will be implemented, including mandatory weight room training for fraternity members who aren’t cut and a fund to allow chunkier sorority girls to get liposuction.

“The impetus behind these measures is that if we, as houses, can’t shame our less attractive members into total trendiness, we must have laws that force them to behave otherwise,” said Necessary.

A man in the back of the meeting stands. Others turn to address him.

“I don’t recognize you,” says Necessary. “What house are you in?”

“I’m a member of the co-ed architecture fraternity,” he says.

Necessary supressed laughter. “What do you have to say?”

“I have a question,” responds the man. “Why are you so worried about how much negative press you receive at the university? The Greek system produces hundreds of students every year who are actively involved in bettering the university. Some are award-winning journalists, others are highly-paid screenwriters. We’re all aware of the athlete-Greek connection. Our house GPAs are much better, too.

“Fraternities and sororities hold dozens of philanthropies every year that donate money to needy organizations around campus like cancer research and the Children’s Hospital. Greeks contribute to community service organizations all over the county. I think we contribute more to the well-being of the area than any other organization on campus.

“So I’ll ask you again, why do you allow the campus to see only the negative part of Greek life and not the positive?”

The audience sits, stunned. Finally, someone raises their hand.

Eyes widen. Smiles spread. A chant of “Toga!” rises through the crowd. Committees are planned. Parties are formed. Lipstick is applied.

As the meeting ends, Necessary walks over to the dejected architecture student and puts his arm around him. “Hey, buddy, don’t be so sad,” he says. “We know we’re given a bad rap. We also know we do a lot of good for our school. But we can’t change decades of social stigma. We do the best we can and have as much fun as possible until Sample decides to put even more ridiculous restrictions on us.

“And why should we get bent all out of shape over a DT article? Life’s too short to worry about that crap. We’re all good students. We had to earn our way into this school somehow. Let people be amazed when we outperform them in class.”

The student looks at Necessary and smiles. It was true.

It was all true.