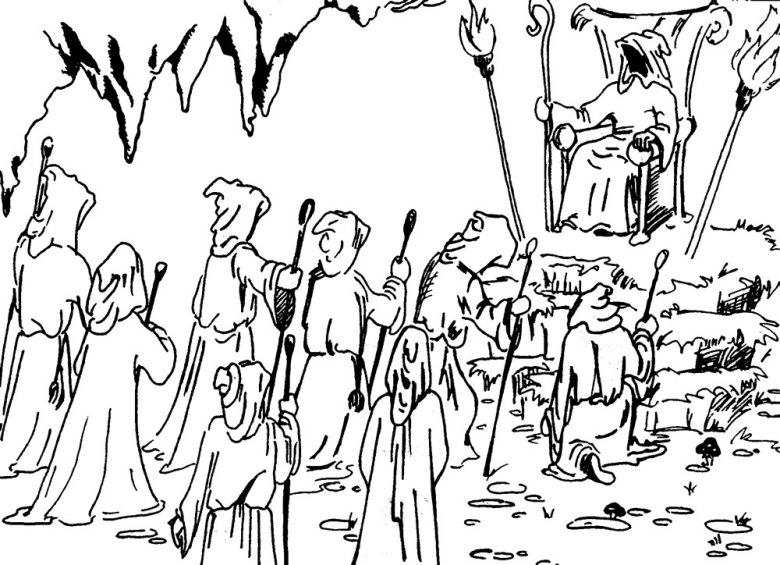 Deep in the bowels of Bovard Auditorium, a meeting is taking place. A sacred ritual to the uninitiated, the meeting takes place annually and sets many events in motion, some sinister, some benevolent.

Steven Sample is ready to see the Deans.

One by one, each dean is led into an antechamber, conveniently absent from the architect’s blueprint, and are seated by the secretary. Sample is perched three feet off the ground in his throne, an onyx contraption carved in the Middle Ages. Sample’s hands rest on ornate gargoyles crafted into the chair, his entire face save his eyes hidden in the shadows. As the last dean is seated, a question emerges.

“May we begin the meeting, your Lordship?” asked one of the deans, his hand raised.

“Not until the oath is spoken,” said Sample. “You all know that.”

Slowly, each voice began to speak. “We, the protectors of higher learning,” they said, “do hereby swallow our pride and convictions and bow to the mightiest of officers of the University, inventor of the microwave touchpad, Steven Sample, so that we may go about our daily business without fear of pain and suffering.”

As attendance is taken, the shrill, irritating noise of the Trojan Marching Band filled the room, and indeed, every nook and cranny of every building in a two-mile radius.

“He serves a darker force than I,” said Sample. “He is immortal and will plague our ears as long as we live. Get used to it.” Sample paused and looks around the room and smiled. “Secretary, read the minutes of the last meeting. Refresh our memory.”

The secretary unfurled a weathered scroll and began to read. “Traditions were discussed. It was voted to systematically cancel each and every tradition that lured students here. It was also voted to raise tuition and food prices on campus while lowering quality of both education and the eating establishments. It was also voted on that poor students would be systematically weeded out by making it absolutely necessary to have a personal computer and internet connection to survive at this school. Those are the minutes.”

“So as you can see it’s been a pretty successful year,” said Sample. “We’ve accomplished all of our goals and the students are the placid lumps we’ve tried to mold them into.”

The deans cheered. Anything that made their lunch schedule a little more free was great for them.

Sample continued. “I’ve brought you here today for a reason. Despite the fact that I’ve manage to secure two billion dollars in donations to the university in the past seventh months, we are still operating at a deficit.”

An awed hush fell over the deans.

“I know. It’s terrible,” said Sample. “Therefore, we’re going to be implementing a few more changes that will take place in the next year. Any objections?”

“Shouldn’t we hear the changes before we object to any of them?” asked Dean Weisberg.

The room fell silent. The rest of the deans couldn’t believe someone had voiced an opinion. It was unheard of.

“Dean Weisberg, for your insubordinance, I condemn you to teaching a Freshman Seminar!” bellowed Sample. The blood drained from Dean Weisberg’s face. Screaming for forgiveness, the dean collapsed to the floor sobbing.

“Anyway,” said Sample. “Any objections?” No one spoke. “Great,” Sample continued. “Now, ever since I was appointed to lord over every living object on this campus, I’ve been thinking about the classes we offer. Some of them really stink. I think Dean Weisberg can testify to that.

“A lot of the students have been complaining that we don’t offer practical classes. As much as it pains me, I agree with these students. Who needs a Rock History class? Or a class on how to sail? Who the hell sails anymore? That’s why you buy a damn YACHT.

“Therefore, I’m eliminating a great deal of classes.” The deans looked at each other. “Don’t worry,” said Sample. “If anything, this will give you more time to eat lunch and look busy.

“The school of Gerontology is being discontinued. And so is every elective in every school. I’ll be meeting with each of you individually to discuss what classes someone absolutely must have to make a living in their chosen profession. For example, Dean Cowan, you’ll probably have to cut every class except for Ed Cray’s, because, really, do you need to learn how to copy edit? Seriously.”

“Well,” said Cowan nervously. “I suppose not. But why Ed Cray?”

Sample continued. “Look, what do people nowadays need to learn? They need to know how to kiss ass. They need to bootlick. That’s the ladder of success. Think how much sooner you would have been deans if you’d learned to kiss up to me sooner.

“I’m creating a series of classes on brown nosing: Beginner Bootlicking, Advanced Toadying, etc. These classes will teach real world values that students need, not like Biersach and his music classes. Geez, that guy…”

“You get what I’m saying? Like it matters. After all, I helped design the microwave.”

It was generally agreed that Sample was right in all matters and that no discussion was needed. The room was filled with silence save for the scribbling of the secretary’s pen. The agenda pressed on.

“Okay, I recently bought a lot of Dell stock from the money I earn for helping design the microwave, so I want to make it mandatory for students to buy Dell computers every year.”

“Mandatory, sir?” asked a dean in the corner, wisely concealing his face to avoid any possible prosecution.

“Well, mandatory in that non-mandatory way, you know?” Sample said. “Just make it so that every class has vital information on the Internet site that can only be accessed from Dell’s high-quality computers. We’ll tell the students that Information Services required the upgrade. They’re used to half-assed internet service anyway.

“Sound good?” asked the president of the University. Again, silence. “Great! Let’s go with it!”

The meeting was ready to adjourn after several hours of pointed toadying while Sample talked about the politics of the microwave industry as well as addressing several other things about campus life, including turning off all of the fountains except when it was expected for parents to show up. As each dean kissed the president’s ring before leaving, Sample had an inspiration.

Closing the door to the antechamber, he approached the secretary. It was Provost Lloyd Armstrong. “Lloyd, make a note for the next meeting to talk about the Greek system. I haven’t restricted their rights in a while.” The Provost scribbled the note in the margin next to the information about Local 11. “Great,” said Sample, laughing as he walked out and prepared to meet with a foreign dignitary about fundraising efforts.