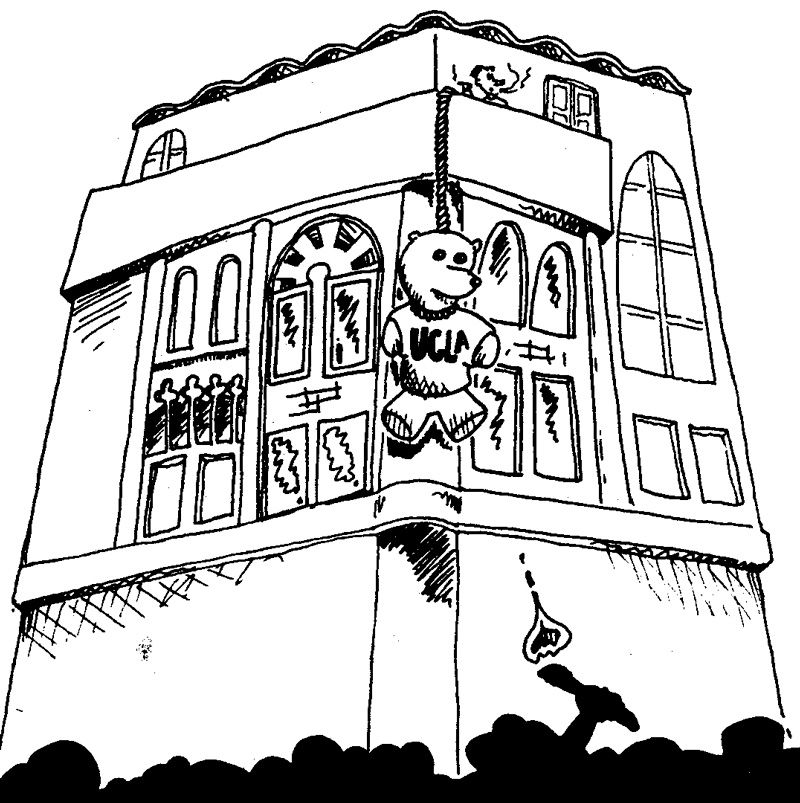 Rivalry rules. There are simply no two ways about it; the idea behind the rivalry is so cool that to trash the idea is repulsive.

Think about it: For thousands of years, civilizations upon civilizations have battled, waged war and decimated each other. The result of this, of course, is death; but then, since all this happened centuries ago, these casualties of war would have died by now anyway.

The point is that this “rivalry” thing has been propagated on a much larger scale by bloodthirsty tyrants. So why can’t it be done on a college campus?

Where else but a college campus can people hurl insults, burn stuffed creatures in effigy and generally trounce on someone’s good reputation — and have it be a riotously anticipated event both sides enjoy?

Now that Troy Week is upon us, we as a student body must unite against UCLA. It’s not because the bruins invaded South Central like a horde of Mongols sweeping through eastern Bavaria. It’s quite simple: UCLA sucks. No further rationale should be needed. UCLA sucks because it’s UCLA. It’s in Westwood, and the size of the campus dwarfs several midwestern towns. Bruins often chide members of our fine university for being snobby, wealthy people, yet it is they who live in ritz and glam while we sit in one of the most economically depressed regions in California.

Whether there is a physical law in the universe that dictates UCLA must suck is unsure, but that notion has been ingrained in my mind since I decided to attend USC. Over the years, USC has built up a friendly rivalry with UCLA that includes everything from vandalism of Tommy Trojan by airlifting paint and dropping it on our beloved shrine to dumping thousands of crickets in one of UCLA’s halls. These events are fun pranks that do not harm those involved, but instead serve as bonding experiences for the whole university.

Why anybody would believe a rivalry is anything but fun is ridiculous. Take a look at this situation: It’s the annual burning of the bruin bear. You’ve got Trojans lined up, waiting to see a stuffed bear being burned on a funeral pyre. This isn’t some walk or a rally or something serious. This is about watching a stuffed bear being burned at the stake. But here’s the kicker: It brings students together.

At USC, there are so many different trains of thought and views that at times it seems difficult to find common ground. However, whether you’re a member of the Women’s Student Assembly or the Interactive Multimedia Club, you can bet everybody’s got the common bond of hating UCLA. It’s one of our lasting school-wide traditions and it unites people all over campus who normally wouldn’t associate with each other.

The USC-UCLA rivalry is the only thing that is keeping this pathetic football season alive. As our team skates toward a losing record, all I care about is that UCLA is defeated. The Rose Bowl is significant only in the sense that it is where we’re gonna pound the living daylights out of our cross-town nemesis. If the Trojans beat UCLA, I will be happy, and so will a lot of students and alumni.

To show rivalry is to have a unified campus. UCLA doesn’t care as much about the rivalry between us, and it shows in the disunity of a campus that encompasses far too much space and devotes little effort to campus spirit.

I know that I picked the right school — that I made the superior choice for a superior education. The fact that I turned down UCLA to attend USC speaks volumes about the fact that USC simply has a better education and more diverse environment in which to pursue one’s major.

Why, then, can’t the collective student body of USC stand up and denounce the inferiority of our collegiate neighbor — especially if it’s in good fun?

Our rivalrous acts against the bruin hanging over Student Union is not about societal intolerance. This is a stuffed bear. It is a toy, not a person or a statement reflecting a history that’s long past. It is not a statement of racism and prejudice, and I resent being forced to change a time-honored tradition because of a group of individuals who think otherwise.

Trojans should take pride that we can rise to the occasion and accept that we have a bitter, evil enemy lying 15 miles away. We should take the bruin bear, hoist it up by its neck and parade it in front of the Student Union, letting people know that our rivalry with FUCLA is alive and well!