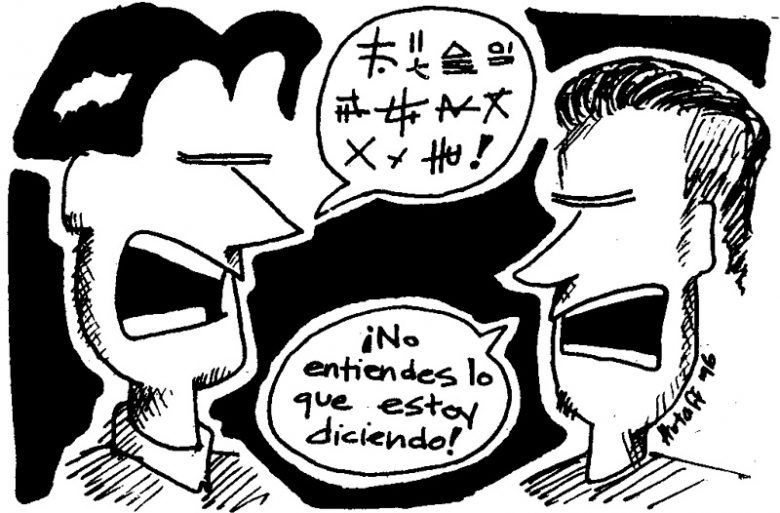 Does anyone remember the Tower of Babel?The Bible’s book of Genesis describes the desire of humans to build an immense tower that could reach God. The task was set about by a group of people who, as always, wanted to be God, or at least get a good glimpse of Him.

The story seems pretty far-fetched in today’s age, where we know a building would have to stretch miles into the sky before reaching the upper atmosphere, let alone reach God, and the structure’s base would be enormous to support the weight of the ever-climbing skyscraper.

Needless to say, our ancestors failed because God decided that such a task was unsuitable for humans to undertake. His punishment for such an atrocity: making different groups of people speak different languages. Thus, the language barrier was born, and little has changed to this day in easing the difficulty of talking to someone who speaks a different language.

In the United States, something seemingly “radical” has been proposed by Congress: creating a national language. This is an excellent idea.

In this day and age, the government is forced to print all of the information documents readily available to the public in at least three languages: English, Korean and Spanish. This is absolutely ridiculous. A unified language can only help strained relations in a country where so many things can hinge on verbal and written communication.

People come to this country in search of a life better than that in their country of origin. The same principle was true for the original colonists settling on the East Coast of North America. The Constitution did not include a national language because all of the people involved in its formation were white English-speaking landowners. However, the language barrier current immigrants create, by not speaking a readily identifiable and homogenous language, is enormous; job interviews are difficult for them to obtain because a translator is not available, and it isolates these people into communities of the same language, and most often of the same race.

So here’s the deal: make American the national language. We can’t call it English because our use of verbs and slang differ so greatly from the word usage in our sister country across the Atlantic.

Make everyone use it.

Deny the masses readily available texts in their own native languages. Federal forms should be in one language only. This will force all people who cannot speak American to learn it. The problem our nation faces today is that it isn’t necessary to learn to speak American; people can rely on local, state and national governments to issue information in their native languages. If this chain is cut, the populace will be forced to learn the national language. What can this hurt? Making people learn a new language is already mandated in high schools, whether it be Spanish or French, German or Latin. Make learning American necessary.

Don’t use other languages in the workplace.

It seems illogical for people working together to start using their native language, which causes confusion amongst those who cannot understand the conversation. I have seen this every day in the dining halls here on campus, where the workers talk extensively in Spanish. What does this accomplish? Certainly the English-speaking co-workers are going to be excluded from communication (which could be intentional). This is extremely divisive.

The effects of such a grand undertaking? It homogenizes the citizens of this nation into a unified whole. The United States is lovingly referred as the “Great Melting Pot;” but very little seems to melt, rather, all of the different ingredients stay separate, like water and oil. Giving a nation its own language brings it one step closer to tying together the numerous different cultures and backgrounds.

Very little nowadays seems to help people live in the United States in harmony. By instituting something like a national language, all of us have a little common ground to build on. Who knows? We may even be able to reach God.